Every year the majority of online users become more dynamic and more demanding to the daily content. Today they are more active than ever at watching the news, events, trends, so it is becoming more difficult for the brands to win the attention of the consumers in the overall info glut. In such complex conditions, newsjacking has become a real boon for modern PR managers, SMM-ers, advertisers and marketers.

"Newsjacking" is the formation of branded content based on the most discussed events in order to increase search traffic, brand awareness and conversion.

The term was coined by David Meerman Scott, author of the book "Newsjacking: How to Inject Your Ideas into a Breaking News Story and Generate Tons of Media Coverage". He describes the newsjacking phenomenona " the process by which you inject your ideas or angles into breaking news, in real-time, in order to generate media coverage for yourself or your business. "

Professional newsjacking allows you to associate a product, service or company with relevant and fresh news topics that are most popular today. Constant newsjacking will have an invaluable impact on the growth of the recognition and the value of your brand. In the West, this tool has been used for a long time and very successfully, but in Russia it has gained popularity recently. However, Russian marketers have already had the chance to evaluate the effectiveness and benefits of newsjacking.

Newsjacking examples that everyone will remember easily:

Within days after the Olympics, promotional prints on the subject of the Olympic rings that didn't completely light up flooded Internet. The first company to please the audience with the words "When 4 rings are all you need" was Audi. They were taken for the real brand advertising and caused considerable excitement and interest among very different audiences, so that subsequently it was supported by the company, as well. Soon other companies started using the rings in their advertising. 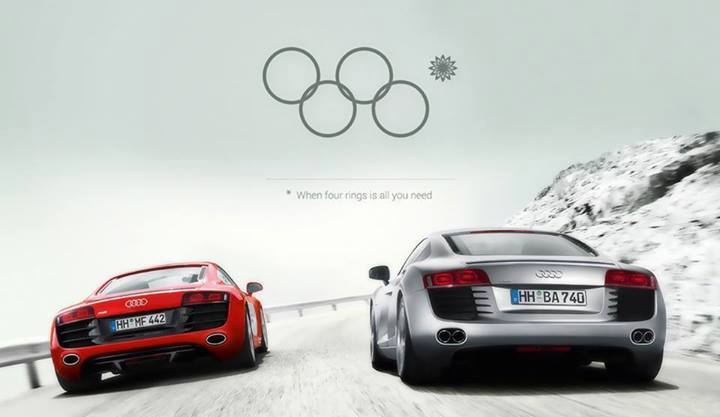 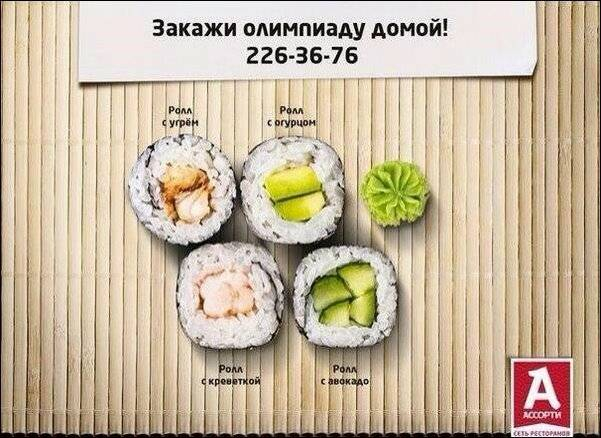 Marketers of many companies were quick to react to the event: the solar eclipse appeared in advertisements on the very day of it, which the mass consumer could not remain indifferent to.

For example, Yota suggested that Instagram users put their selfies against the background of the eclipse with the hashtag # OurSun and get into the video the company dedicated to this phenomenon. 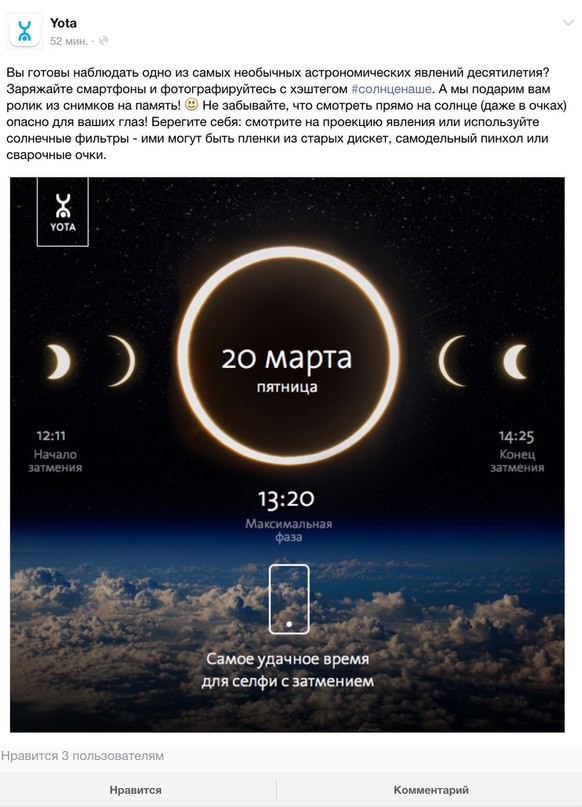 Other brands were not less original in relating their advertising moves with the eclipse. 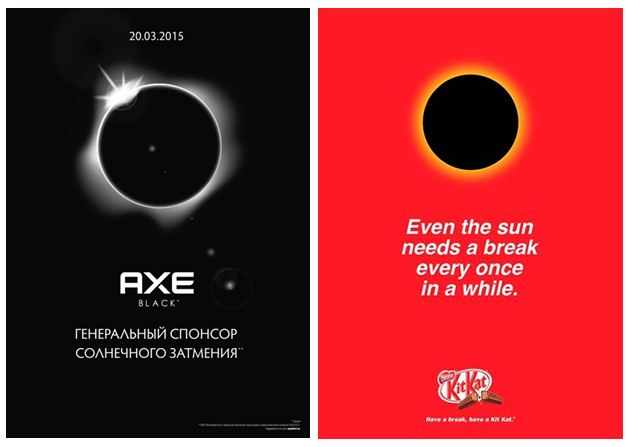 The 2014 Olympic flame went out while the torchbearer was running through the territory of the Kremlin. One of the guards came to the rescue with his lighter. Perhaps it was not a Zippo lighter, but the PR agency that worked with the brand worked very quickly and credited the brand with the merit "salvation of the Olympics 2014".

Zippo Facebook page flashed photos of the flame being relit with the comment "Will you give me a light?"and the tag «Zippo saves Olympics. "In 16 hours, the post received more than 3,000likes and almost 1,000 reposts. Besides the mass sharing in social networks, the brand free articles from such popular online media like News, Adme. ru, RIA Novosti, Slon, etc. 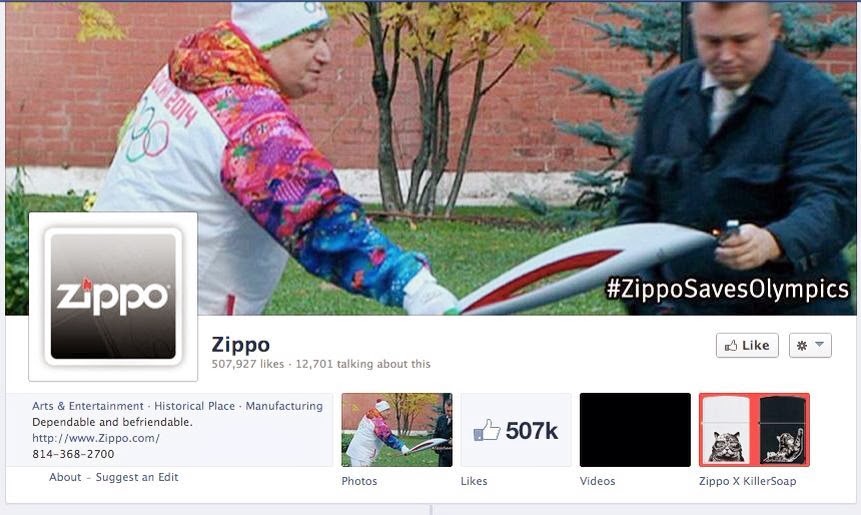 The Russian advertising industry has very few examples of marketing projects that combine creativity, social responsibility, urgency and courage. Such projects usually do not go unnoticed. Such work was shown by S7 Airlines.

The advertising campaign was carried out during the peak of tensions between Russia and Ukraine (March 2014) in support of S7 Airlines flights between Moscow and Kiev. In these two cities, outdoor advertising was posted. In addition, the poster managed to win the attention and approval of lots of Internet users. The basis of the layout was the symbol of peace. The idea of the campaign was that politics should not affect the relations between people, and each person should have the opportunity to fly out to visit their friends, family and relatives. The poster was noted not only by the leading Russian publications, it also won the Bronze Award of Cannes Lions 2014 in the nomination Outdoor.

Experience shows that modern marketers need to monitor not only the events covered by media, but also with what's popular in social networks. Thus, the phenomenal dress that blew up the Internet space and divide it into two camps, was successfully used for the branded content of such companies as Oriflame and MTS. 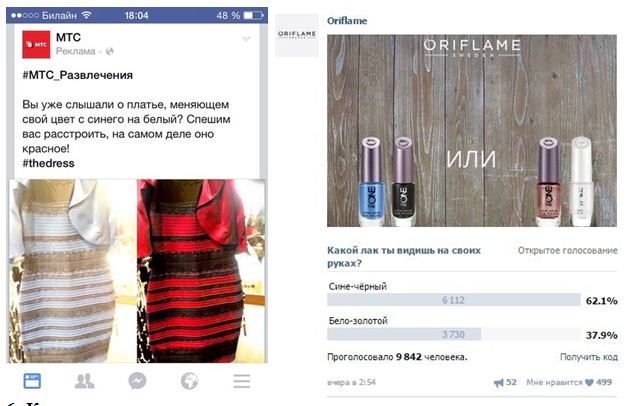 "It's time to enjoy the remaining time: go to Bali, jump with a parachute, drink a glass of Veuve Clicquot, and you can take a loan to do that, for you won't have to give it back - ever!" Alfa-Bank campaigns. However, if the end of the world doesn't not come, then the borrower will not be able to avoid retribution. 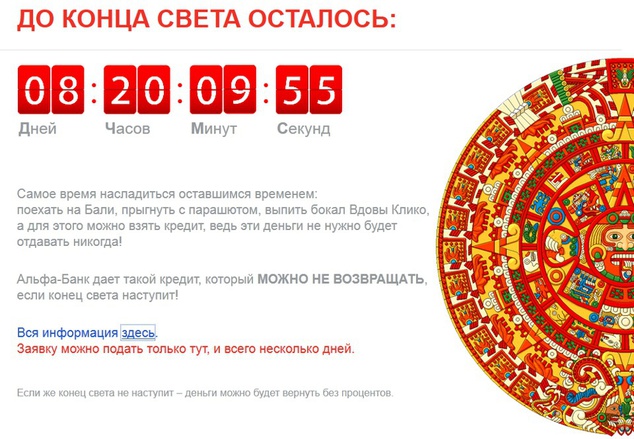 In March 2014, probably everyone noticed the Internet announcements with photos of various bars, shops and companies that they imposed sanctions against Barack Obama and forbade him to enter their territory, to acquire their goods, etc. Who exactly was the one to launch the flash mob, remains unknown.

In an ad of the Swiss mattress manufacturer Riposa, marketers skillfully used a recent FIFA corruption scandal. On the mattress Riposa was written a personal message for Joseph Blatter (already former president of FIFA): Dear Mr Blatter, for a peaceful sleep and a really, really strong backbone).

The campaign participants carried the mattress outside on May 29, during the FIFA Congress in Zurich. After 4 days, an emergency press conference of the International Football Federation took place, in which Joseph Blatter announced that he was leaving his post. 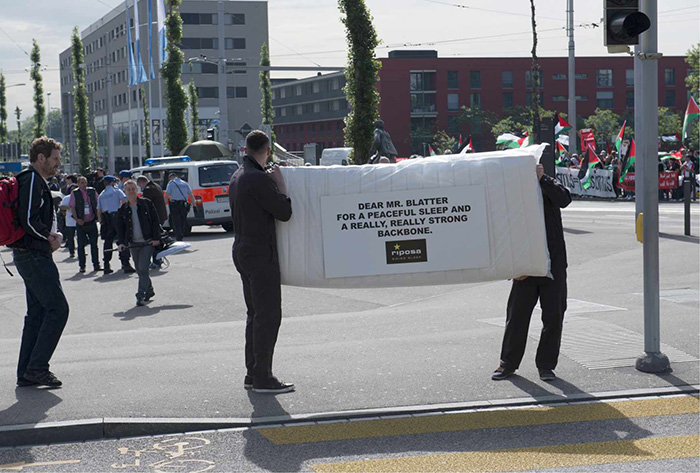 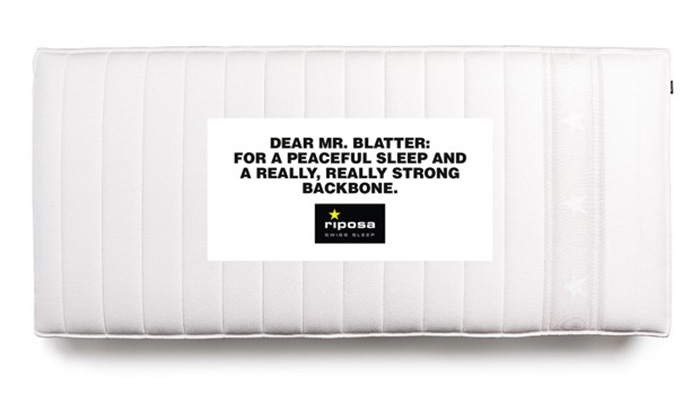